Research by Intelligent Car Leasing reveals that driving tests are showing an overall decline in collisions with other vehicles over the past 5 years.

Intelligent Car Leasing gathered data on the number of collisions with other vehicles and pedestrians in driving tests over the past 5 years (and first quarter of 2014). This ranged across a number of test types for cars, LGVs, PCVs and motorcycles.

Fortunately the statistics for number of collisions with pedestrians are negligible with only 1 in the past 5 years occurring in 2012 (but 2 so far in 2014).

Looking at the stats provided for the first quarter of 2014 Intelligent Car Leasing has calculated a huge predicted fall in the number of collisions during driving tests compared to previous years which is great news for road safety in the UK. Read on for some thoughts on why collisions may be decreasing. 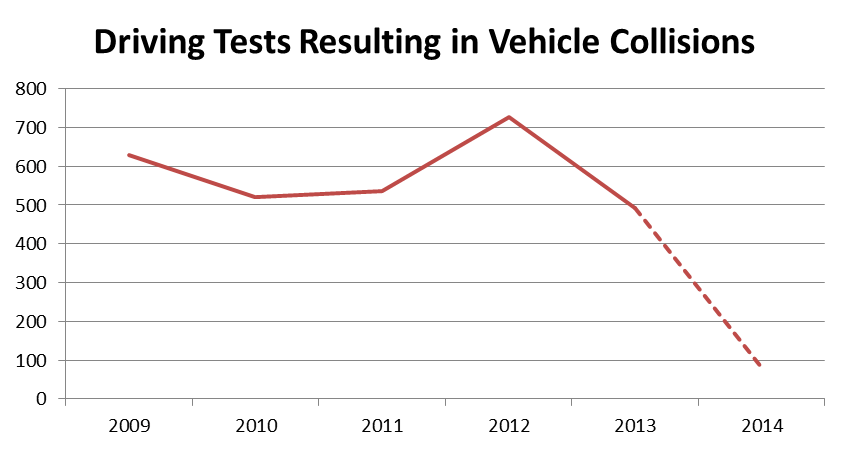 This data is both positive and interesting, but it raises the question of why collisions with other vehicles in driving tests are getting lower (and set to fall much lower if the reported stats from the first quarter of 2014 continue on trend).

To get an insider view of what might be causing this trend we asked an expert, see their opinion below:

DiaryofanADI.co.uk – “If you think about it, a collision is most likely to occur when the driver on test is not experienced enough to either avoid making a mistake of their own, or to react appropriately and promptly enough to avoid a mistake by someone else.

You could argue that candidates are better overall (at the top end of the spectrum), but that would almost certainly be wrong as it isn’t borne out by overall pass rates. More likely is that candidates are not as bad at the bottom end. However, that is speculation without knowing the details of the candidates involved.

Another possibility is that the examiners are taking action more readily and are proactively preventing collisions. After all, instructors have to do that all the time on lessons, but examiners typically sit back and let things progress much further before stepping in (the candidate is supposed to be a full licence holder in waiting, after all).”

No matter what the reason for this decline it’s hugely positive to see such a trend emerging in the UK’s learner driver industry. The fall in collisions during tests found in this research reflects well on pupils, instructors and examiners. Anything that goes towards making the roads safer is positive and Intelligent Car Leasing hopes this trend will continue in the years to come!

Britain’s drivers are well known for being safe when taking to the roads, a study conducted in 2011 showed the UK to have amongst the safest roads in Europe. This new data 3 years on shows that the next generation of drivers are continuing to improve on the UK’s positive road safety record. There’s no reason to believe that this shouldn’t translate to a much safer environment for both drivers and passengers alike in the years to come.

Article & Study with reference to IntelligentCarLeasing.com.

This site uses Akismet to reduce spam. Learn how your comment data is processed.